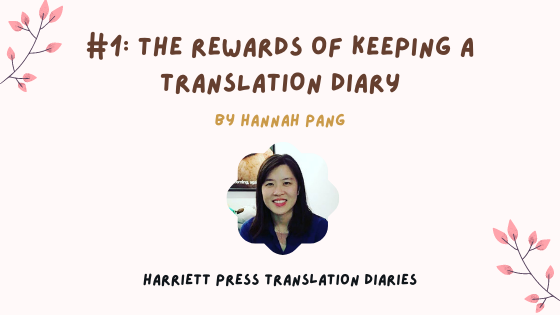 The Rewards of Keeping a Translation Diary

The idea of keeping a translation diary first took root in my mind when I came across Daniel Hahn’s translation diary on Charco Press’s blog in January this year. Hahn is a British writer, editor and translator (Portuguese, Spanish and French). Upon more Googling, I discovered he had first begun blogging about his translation in 2013, and he wasn’t the only translator to do that. Kathryn Hemmann, translator of Japanese literature, did the same in 2015. As I studied their diary entries, I pondered what motivated them to, in Hahn’s words, “make things more difficult for himself”, spending additional time writing and reflecting on the translation process, outside of the gruelling act of translation itself. Is there a lesson or two for younger translators like myself and for readers of translated literature?

Michael Williams, in an article for The Guardian last November, wrote that the publication of Australian writer Helen Garner’s diaries made “such a pleasurable, significant cultural contribution”. I believe the same is true of translation diaries. Translation has always been an imperceptible unit of literary culture, though this is slowly changing as more small presses advocate for translated literature and more literary translators use social media as a conduit to share snippets of their translation processes and thoughts. It’s fascinating to also observe the evolution of translators between their first and most recent posts, as Williams put it, “as a kind of preserved present”.

Translation diaries also take readers behind the scenes to look more closely at the inherent traits of an author or a language, translation processes, and linguistic calculations translators make to render a translation accurate and readable in the target language. If not for Hahn’s diary, I wouldn’t have learned that adjectives follow their nouns in Spanish language ([the man] tall, [the shirt] white), much like the Malay language. Or that one of the writing traits of Chilean writer Diamela Eltit, author of the book he’s now translating, is the use of multiple adjectives, the effect of which he has to ensure adheres to the rules of the English language. In Kathryn’s translation diary, she had recorded how much she paid for copy editing and illustrations and listed her plans for the following month like a sticky note to herself.

I invite you to join Stella, Lizzie and I as we embark on our journaling journey chronicling our translations of Korean fiction novels: Volume 1 and 2 of Jung-myung Lee’s Painter of the Wind and Seo Su-jin’s Korean Teachers. I hope our reflections will help to lift the veneer of inexplicability and throw some light on what translation involves, and along the way galvanise more readers into reading translated literature.