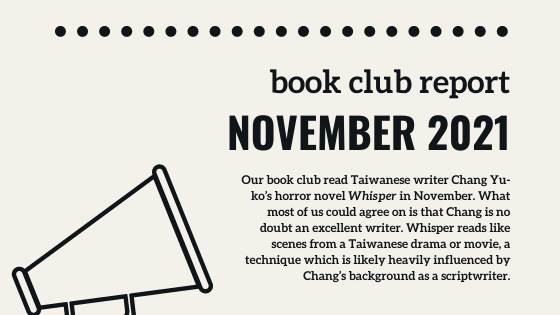 He watched as her head started to twist.

No, not just her head. Her entire body was turning.

He now realised her body had been facing away from him at first, but her head…

And now both head and body had turned a full half-circle—her head was facing away, her body facing toward him. She dropped to the floor on all fours, her face now turned to the ceiling, and scuttled a few insectile steps toward him before jerking to a halt.

Our book club read Taiwanese writer Chang Yu-ko’s horror novel Whisper in November. As Honford Star describes it, Whisper is a plot-driven, Taiwanese horror story that cleverly combines Taiwanese folklore, the Japanese occupation of Taiwan, and the long-term mistreatment of the country’s aboriginal people into a story of how the past can still kill.

During our discussion, I shared how spooked I was while reading it at night before going to sleep. I realised that was because I was familiar with Chinese religions and spirituality and had visited Taiwan a couple of times, so I could relate to and understand the references to the supernatural, Taiwanese folk cultures, and a little bit about indigenous people depicted in the novel.

I’m saying this because our book club members had pointed out that there are some writers that might expect readers to already know some local context, so they may not see the need to elaborate on certain events (e.g. February 28 incident) or characters (e.g. Chinese priestess, xiaogui) in the story. 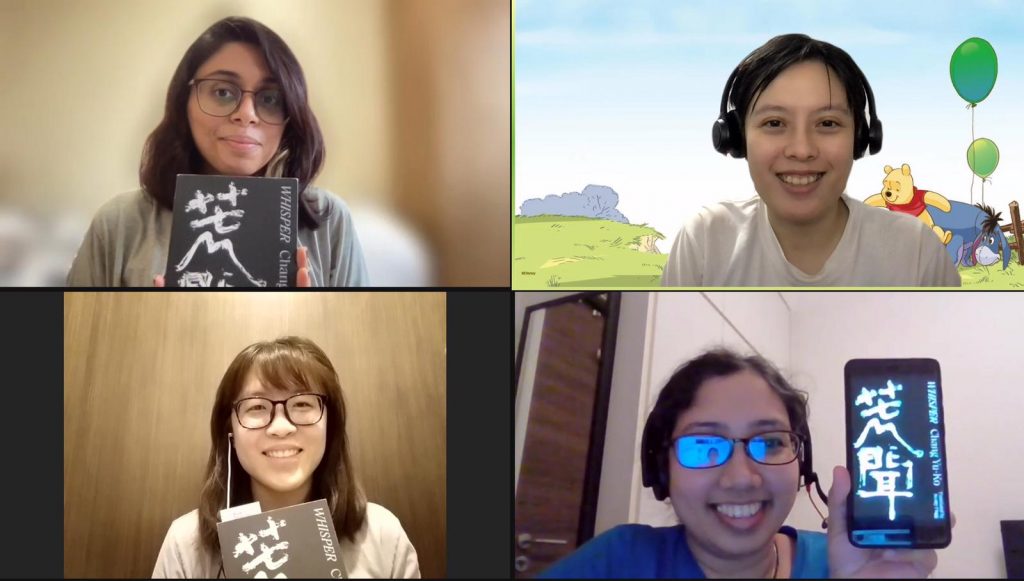 In reading Whisper, it may therefore be helpful if the reader has some prior knowledge of the local religious, political and social contexts, or be willing to deepen their understanding by looking up on the internet about things that aren’t familiar to them.

Chang seemed to have wanted to explore quite a lot of things in the novel, so much so that one of our members called it ‘info dumping’. Perhaps Chang was trying to present a more complex Taiwanese identity or conscience steeped in the country’s turbulent political and social histories that isn’t as often palpable to a non-Taiwanese or that has been entirely forgotten by some Taiwanese themselves.

What most of us could agree on is that Chang is no doubt an excellent writer. Whisper reads like scenes from a Taiwanese drama or movie, a technique which is likely heavily influenced by Chang’s background as a scriptwriter.

We especially liked how Chang’s succinct style of writing could evoke very strong emotions and create very vivid images in the scenes where tension built up between Shih-sheng and his father and where Shih-sheng was ascending Mount Jade to solve the mystery.

To know whether you’ll like the book, you’ll have to read it for yourself.

For the month of December, we’ll be reading Portuguese writer José Saramago’s Blindness.

Everyone is welcome to join our book club. We meet every last weekend of the month, either online or in person, depending on the COVID-19 restrictions. For more updates, follow us on Instagram and Facebook!