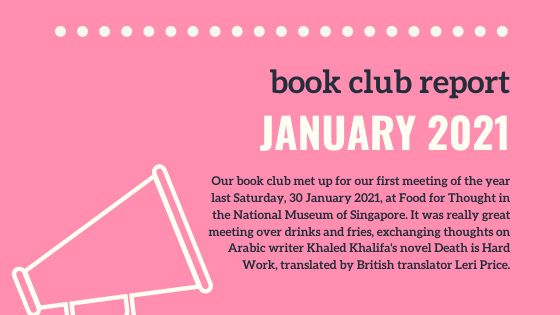 Our book club met up for our first meeting of the year last Saturday, 30 January 2021, at Food for Thought in the National Museum of Singapore. It was really great meeting over drinks and fries, exchanging thoughts on Arabic writer Khaled Khalifa’s novel Death is Hard Work, translated by British translator Leri Price.

We started off with a short introduction on Khalifa’s writing routine, researched from news articles before the meeting. It was intriguing to know that despite the surrounding chaos, violence and the inconvenience of getting through checkpoints in Damascus, Syria, where Khalifa is now based, he frequently writes at a café and not at home. Some possible reasons could be the lack of electricity and heating at home, and the opportunity to situate oneself in the midst of the turbulence which no doubt provides fodder for writing and contemplation.

January had been a busy month for most of us so not all of us could finish reading the book. The monotonous style of narration with absolutely no dialogue might also have played a part. Nevertheless, we had an interesting discussion which touched on several topics, and we also managed to catch up with one another.

Here are some of the questions we discussed:

There are countless translated books out there, but for the convenience of our book club members so far we’ve selected only books with adequate copies in the NLB. So, with that in mind, we’ve decided to read French writer Laurent Binet’s HHhH, translated by Sam Taylor, on the last Saturday of February.

*Harriett Press’s Translated Literature Book Club is a monthly book club that meets to exchange thoughts on a translated book selected for the month. Anyone is welcome to join us!⁠ Find out more about book club meetings by following us on Facebook, Instagram and Twitter!