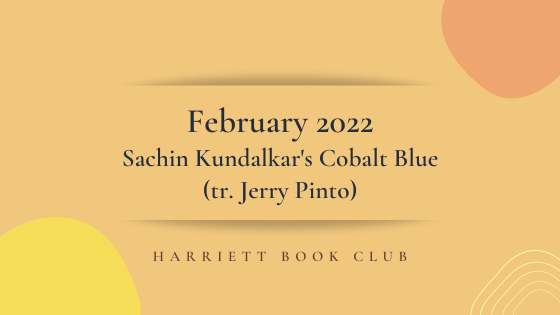 We were so fortunate to have renowned Marathi writer and film maker Sachin Kundalkar join our February book club to shed more light into his debut novel, Cobalt Blue, which, his own words, has been beautifully translated by Jerry Pinto.

First published in Marathi in 2006 and then translated into English in 2013, Cobalt Blue is about a brother and sister, Tanay and Anuja, who fall in love with a paying guest in their home in Pune. It explores male sexuality, family relations, gender roles, and societal norms.

Most of our book club members agreed that Cobalt Blue builds on a simple plot and a symmetrical structure (first, Tanay’s point of view in a first-person narration, then Anuja’s in the form of diary entries) that makes for a smooth reading. Though based on Indian culture, the novel comes across as very Asian as various themes like traditional roles, son preference, sibling rivalry are relatable to non-Indian readers.

Despite the symmetry in structure and both siblings being infatuated with the same man, Cobalt Blue presents two contrasting ways of dealing with the aftermath of a failed relationship, which also reflects the different lived realities of heterosexual and homosexual characters.

Perhaps there are three layers of expressions of grief depicted through this novel: the uppermost layer where heterosexuals can overtly and uninhibitedly express their grief and seek therapy; the middle layer where homosexuals keep their pain and anguish hidden and private; and the bottom layer where bisexuals (as represented by the paying guest whose voice isn’t even given a chance to be heard throughout the novel) and their emotions and needs are completely obscured.

Perhaps the paying guest serves as a concept that doesn’t exist in reality – an Indian bisexual man without a name, without a family, without the encumbrance of traditions and familial expectations and pressures.

Upon reading the book and discussing various themes with the book club, it was especially gratifying to hear from the author himself – what had inspired him to write the novel, what are his influences and inspirations, what are the challenges in exploring sensitive issues of male sexuality in his creative work?

Sachin shared with us that he’d written Cobalt Blue in his early twenties and his debut work had received the support of many senior writers in Pune. There was hardly any homophobic response. It was an amalgamation of stories of many people he’d met two decades ago, when it had been difficult to be bisexual and be fully in love.

He called Cobalt Blue an analogue novel, written before the present age of interconnectedness. Before the invention of the internet, there was a purity in the pain of never seeing the person again. If two lovers parted, they truly parted as they will never see each other again. But today, with the internet, no one can leave anyone anymore. There isn’t a real respect for separation anymore. Cobalt Blue is a story that cannot happen today.

Join us in March as we discuss Broken Stars, an anthology of Chinese short science-fiction stories by award-winning writer and translator Ken Liu.

Everyone is welcome to join our book club. We meet online every last weekend of the month. For more updates, follow us on Instagram and Facebook!