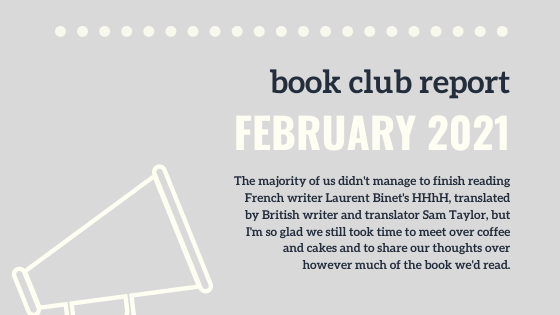 February had been a busy month for most of us, what with the CNY celebrations, the on-goings in our personal lives, and the increasing workload that marks the first quarter of the year.

The majority of us didn’t manage to finish reading French writer Laurent Binet’s HHhH, translated by British writer and translator Sam Taylor, but I’m so glad we still took time to meet over coffee and cakes and to share our thoughts over however much of the book we’d read.

We met at dal.komm cafe at Marina Square on the last Saturday of February, 27 February, which incidentally happened to be K’s birthday too. So, we kickstarted the meeting by wishing K a happy birthday and by sharing two lovely cakes! 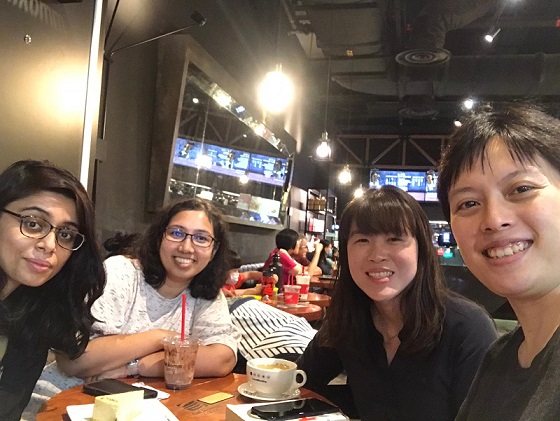 We then dived into the background story of the book, author and translator. HHhH was originally published in French in 2010, and recounts the development of Operation Anthropoid which involved two Czechoslovaks who were set out to assassinate Reinhard Heydrich, chief of the Nazi secret services, in 1942. It was Laurent Binet’s first written work, and Sam Taylor’s first translated book. The book was adapted for film in 2017, in “The Man with the Iron Heart”.

There was a general consensus that the structure of the book was unusual and at times not necessarily in a good way; there were chapters as short as a single sentence, and the story development seemed messy, as if the author had simply dumped whatever information he found while researching the historical event. There were also parts with superfluous information and irrelevant stories, which in the end didn’t deliver what the synopsis was supposed to. The book was too heavily focused on Heydrich, and too little attention was given to Gabcik and Kubis, similarly crucial characters in Operation Anthropoid.

On the other hand, what we found intriguing was that the author had adopted a less emotional approach to what was an unfunny and sombre historical event, and introduced the idea of authorial self-reflexiveness in fiction writing. Reflexivity, more simply described as self-reflection, has been a practice encouraged in fieldwork for social scientists, and it’s refreshing to see it explicitly applied in a novel like HHhH.

Here are some of the questions we discussed:

There are countless translated books out there, but for the convenience of our book club members we will select only books with adequate copies in the NLB.

With that in mind, we’ve decided to read the late Singaporean writer Yeng Pway Ngon’s novel Unrest, which was awarded the Singapore Literature Prize and translated by Jeremy Tiang, for our March book club meeting.

*Harriett Press’s Translated Literature Book Club is a monthly book club that meets to exchange thoughts on a translated book selected for the month. Anyone is welcome to join us!⁠ Find out more about book club meetings by following us on Facebook, Instagram and Twitter!