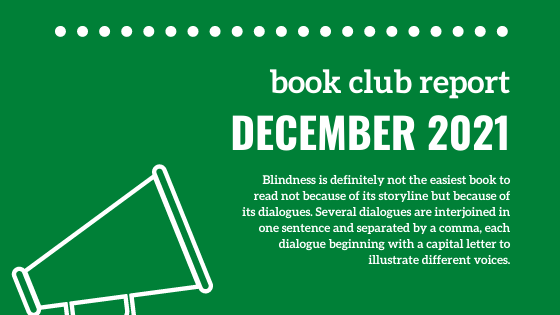 The last book our book club read for 2021 was Portuguese writer and Nobel Prize in Literature winner Jose Saramago’s Blindness, translated by Giovanni Pontiero. While preparing for the book club, I read up a little on Saramago’s personality – he was known as an outspoken atheist. I haven’t read his other books but I can see how much his atheist beliefs and disillusions with the human race come through in Blindness.

Published in 1995, Blindness is a story about a city hit by an epidemic of ‘white blindness’ that spares no one. The authorities confine the blind to an empty mental hospital, but there the criminal element holds everyone captive, stealing food rations, and assaulting women.

As our book club members can attest, Blindness is definitely not the easiest book to read not because of its storyline but because of its dialogues. Several dialogues are interjoined in one sentence and separated by a comma, each dialogue beginning with a capital letter to illustrate different voices.

We found this style of writing dialogues really intriguing as it seems to attempt to reflect the chaos that transpire when anxious blind people speak almost all at the same time. In a world without sight, our voice becomes our primary tool of communication – that is if you haven’t lost your voice too. In other words, Saramago’s style of dialogue writing seems to make a lot of sense but it can be exhausting for the reader as it demands him or her to pay very close attention to the text. 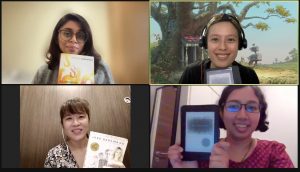 How did you recognise me, Above all, by your voice, the voice is the sight of the person who cannot see, Yes, the voice, I’m also beginning to recognise yours, who would have thought it, doctor, now there’s no need for an operation, If there is a cure for this, we will both need it, I remember you telling me, doctor, that after my operation I would no longer recognise the world in which I was living, we now know how right you were,

Storyline wise, the numerous themes about blindness (physical/metaphorical), fear, greed, lust, morality, sin, fairness, faith (or the lack of) discussed in Blindness prompt reflection. It makes the reader question if there is a disease more incurable than blindness? Are there limits to one’s malice? How far would one go to stay alive? What use are one’s values in a world without sight and comfort?

For the first quarter of 2022, our book club members have decided to read the following translated books:

Everyone is welcome to join our book club. We meet online every last weekend of the month. For more updates, follow us on Instagram and Facebook! Or email us at editor@harriettpress.com to indicate your attendance.